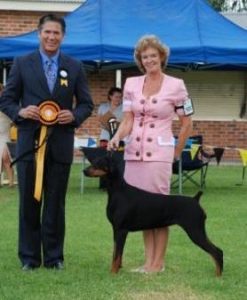 “Kendra” is Miss Personality and a bit of a wild child who loves life to the fullest. At 6 weeks she could out run anyone to the gate and still runs like a greyhound everything is a race!

At 6 mths and 1 week old of age Kendra took out a 20 point Best of breed award and Minor in Group.

At 9mths Best In Show at the Dobermann Open Show and from there has become a consistent winner, unbeaten in her classes for the whole of 2008 (Vic) and picking up either reserve, challenge or best of breed at every show entered.  Plus gaining her tracking dog title and passing her track 3. She gained her CCD & CD titles in obedience and her Aust Champion title all before the age of 2. 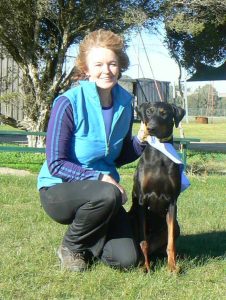 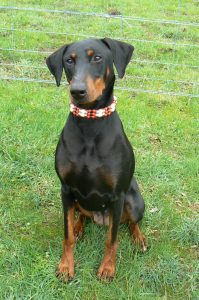 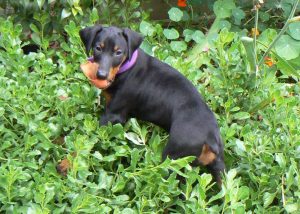 After a very pleasing 2008 Kendra has started off 2009 well, picking up challenges at most shows she has attended. Although she won’t be present at every show as we have young Paris to title and some other youngsters coming out soon too, Miss Kendra will have to take her turn and be there as often as possible.

Critique by Mrs Hillary Partridge-Duckham
So close between 1 & 2, just love her type. Excels in head and neck with clean cut outline & well sprung ribs. Good tuck up and alert expression. Lost out only on movement.
2nd place Open bitch

“The bitch was beautiful, elegant, smooth, clean one piece standard Dobermann.”  “I asked them both to come to the centre and stand on their own.  At this moment the bitch, unflinchingly and with intensity, owned the ground she stood on making her most deserving to be my best of breed”.