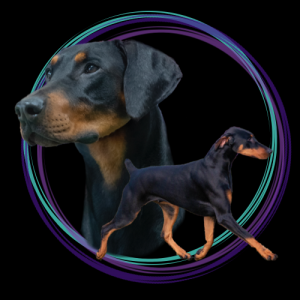 I live with my husband, Robert, on our 1.5 acre property in Pakenham & are owned by 4 Dobermanns.  The dogs think they live in heaven all year round.  Our dogs are fed exclusively on Dr. Billinghurst’s “BARF” diet, a completely natural way of feeding, they all love it. No commercial dog foods allowed here!!

“Coppertop” prefix has been around for more than 60 years, originally used by my grandparents with their top winning and very successful Australian Terriers.  I took over the prefix in 1992 to have just “one” litter with our family pet “Sheridan”.  From here I started doing obedience and was coaxed into the show world and got hooked!!!

The first bitch shown was “Stacey” – Coppertop Southern Belle CDX TD ET also from “Sheridan”.  She didn’t quite make it in the show ring but went on to prove herself in obedience, tracking and endurance.  Sadly we lost our girl in July 2007 aged almost 11years old, she is greatly missed.

I bought my first male puppy “Zach” – Ch Riverpark Firestone CDX TD ET ROM from Riverpark Kennels in 1997 to continue with my passion for showing.  He did not disappoint me.  I couldn’t have wished for better, although initially he and I blundered through, not even winning a class until he was five and a half months old.  But from that day on picked up many class in group and Specialty in show awards.

After having Zach for only five weeks I bought two of his half sisters from a breeder because they were starving and dirty.   They were very small for their age but I thought at least I could give them a good home.  With a good diet of natural food they blossomed and “Tegan” and “Paige” also began their show careers. Tegan was a natural and also was rarely beaten in her class and won many class in group and in show awards at both All Breeds and Specialty shows.

Zach was my foundation dog and produced progeny with titles in confirmation, (both Champion & grand champion) obedience, tracking, endurance and working evaluation.  I guess many start with a bitch, but I wanted to experiment with him and so it started….…

On a specialty level we have won :

Plus numerous best in show and runner up in show all breeds for various dogs.

My sole purpose for breeding is to improve the conformation of our breed and to produce good working dogs with stable temperaments that are suitable for all phases of dog sport, but also importantly to be family pets and companions.

Please enjoy your tour of our website, hopefully it will give you an insight into the type of dogs we breed.  Plus have a look at the dog coats and embroidery we offer for sale, custom made to suit